Aaron Bates 25 years old
1B, BOS
A third-round pick from the 2006 draft class, the 6-4 and 240lb Bates is a big, strong hitter with solid plate discipline. Aaron has plus power that's near big-league ready, but not much else. His bat-speed is suspect, which means he may flounder at higher levels if he keeps trying to hit every pitch 600ft. He'll start 2007 with the AA Sea Dogs, and he's likely to end the year in the same place: at this point he's too far down the depth chart to have much impact before 2010 or later. Because of the depth in the Sox system, Bates is a likely trade candidate, especially within the AL.

Reymond Fuentes 18 years old
OF, BOS
The top offensive talent out of Puerto Rico has impressed a number of teams recently, including the Los Angeles Angels. Related to New York Mets outfielder Carlos Beltran, Fuentes is a fast-twitch, excitable player with a promising line-drive bat and blazing speed. He's a free swinger, but he has good plate coverage and a lightning-quick bat speed. Only 160 pounds, Fuentes could add home-run power with more muscle mass. His range in center field is above-average, but he has a weak throwing arm. 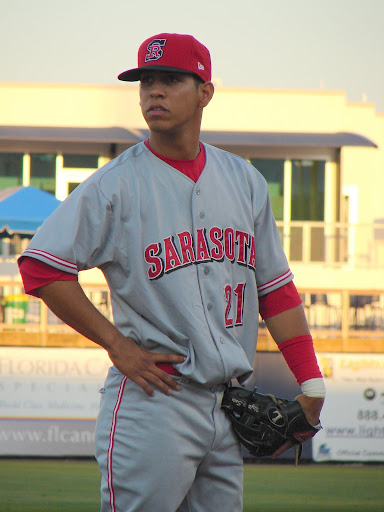 Neftali Soto 20 years old
3B, CIN
Puerto Rican prospect Neftali Soto is a toolsy infielder who's growing up fast in the Reds' power-packed farm system. After embarassing rookie ballers, he was moved up to A-level Dayton last year, and promptly slashed .326/.343/.500 with seven homers in just over 200 at-bats. He'll start 2009 back in A-ball, but he won't finish the season there.

Ivan DeJesus Jr. 22 years old
SS/ 2B, LAD
The Dodgers Minor League Player of the Year for 2008, DeJesus doesn't have much left to prove in the minors. Apparently inspired by Baseball America's description of him as a 'below average' hitter, DeJesus took the Southern League to task in 2008, when he swatted an eye-opening .324/.419/.423 at AA Jacksonville. The young infielder led the entire Southern League with a .419 OBP in his first AA season, testimony to his disciplined plate approach. When he makes contact, he's a hitter in the Howie Kendrick style: gap to gap line drives with excellent bat control. In the field, he has soft hands and excellent (inherited?) baseball instincts.

The Dodgers have not been afraid to pay youth in recent years, which means DeJesus could see action in the Ravine in 2009.

Reynaldo Navarro 19 years old
SS, ARI
Reynaldo is another player who has not advanced past rookie ball. He’s a switchhitter that shows more power from the right side but has more bat control from the left. Since his game will not be his power he should stick to moving the ball around. If he develops how he is supposed to, we might have one of the top SS in the sport in this guy.

Hector Correa 21 years old
RHP, FLA
The first pitcher on this list, he missed four months last year because of a sore shoulder. Because of that, the mid 90s fastball he showed in 2007 stayed mostly in the low 90s. He also shows a good changeup and slider as his other pitches. It will be ineresting to see if his velocity returns in 2009 and he stays free from shoulder problems. Efrain Nieves 20 years old
LHP, MIL
If you looking for a potential fast rising young pitcher in the Brewers farm system, Efrain Nieves would be a good pick. Taken as a 17 year old out of Puerto Rico, the southpaw was the Brewers 7 round pick in the 2007. He signed quickly and was able to get in 45 1/3 fairly nondescript innings in between the two rookie ball levels. While he struck people out (49 K) at an impressive enough rate, he walked (26 BB) them at an alarming one. That changed for him in 2008, pitching at the young age of 19 for Helena. Nieves posted a 4.48 ERA in 76 innings, but that wasn’t the true story of what he accomplished. He improved his control while only losing a bit of the K numbers and that led to a 6.5/1 K to BB ratio and 1.13 WHIP. The run prevention hasn't caught up with the peripheral numbers yet, he posted a 4.48 ERA, but it should eventually work it's way down.
Nieves throws a fastball that tops out in the low 90’s at this point, though there is some room for him to add to that as he grows. He compliments the fastball with a good curve and a work-in-progress changeup. Brewer fans should get a chance to see Nieves pitch up close and personal this for the Brewers new low-A ball affiliate in Appleton. If all goes well there, he could land in the pitcher friendly FSL with the Brewers High A affiliate before the end of the year. Nieves is still a ways away from the major leagues, but his mix of lot’s of strikeouts and few walks at a young age and from the left side of the mound make him as intriguing a “sleeper” for the top ranks of the system as you can find.

Javier Rodriguez 19 years old
OF, NYM
He’s still a teenager, drafted in the second round in 2008. His first exposure to rookie ball he only hit .193, but he shows all five tools. Whether he can put them together will decide how far he advances. Despite his poor average he only had 27 K’s in 38 games so he was making contact. A good spring will give the Mets confidence to start him in low A, otherwise he will have to play in extended spring training until the Rookie leagues begin, or Javier shows the readiness to handle low A.

Luis Atilano 24 years old
RHP, WAS
At 24 in 2009, he is the second oldest player on this list. He was acquired by the Nationals in the Daryl Ward trade and had a solid year in Potomac (2.32 ERA in 15 games, 11 starts). He underwent Tommy John surgery at the end of 2006 and missed all but one game in 2007. He’s not overpowering, with a low 90s fastball, a slow upper 70s curveball and a good changeup, which will be his out pitch. If he could tone his body more the velocity could increase, but he will take another year like 2008.

Lou Montanez 27 years old
OF, BAL
He still has rookie eligibility so he qualifies for this list. At one point when he played for the Cubs he was considered one of the top prospects in the minor leagues, but his star fell quickly. He was moved from shortstop and now plays the outfield, though his arm is pretty soft for being a hard throwing shortstop. He had a near Triple Crown year with Bowie, hitting .335 with 26 homeruns and 97 RBIs. This led to a promotion to Baltimore where he will probably be no more than a fourth outfielder. He did hit .295 in 112 at bats with three homeruns, numbers he should not be ashamed of.

Luis Cruz 19 years old
LHP, HOU
A 2008 draft pick, he only stands 5′9″ but he can hum the fastball in the low 90s, which is phenomenal for a kid. He throws a changeup but still hasn’t developed a third pitch. Without a third pitch he will end up settling into the bullpen, which may be the best place for him. He did miss the final six weeks because of elbow problems, so his innings will have to be monitored. In seven starts last year he finished with an ERA of 2.28.

Angel Morales 19 years old
OF, MIN
He might have a name from the generic baseball player naming machine, but Twins outfielder Angel Morales isn't your typical prospect. After hitting .301/.413/.623 last year in the Appy League, the teenager will move to A-ball for 2009, and expectations couldn't be much higher. He's small but still growing, fast and getting faster, a plus fielder who's sharpening his skills every game, and did we mention the bat? He's only 19, and he'll lurk in the shadows of Revere and Hicks for a bit longer, but his 15 homers in less than 200 at-bats last year are already opening eyes wide. With a shot at being a truly elite five-tool player, he's one of the highest-ceiling speed-power threats in the Twins' stable. But keep your horses in check: he probably won't see Minnesota before 2013 or later. 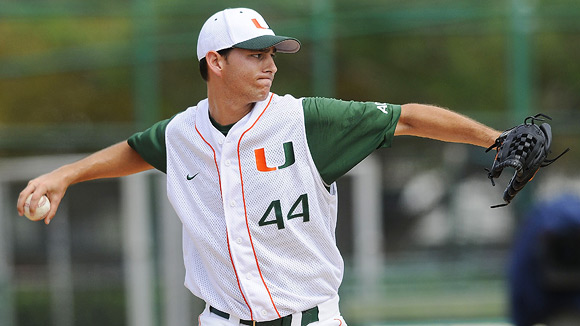 Carlos Gutierrez 22 years old
RHP, MIN
The ex-Miami Hurricanes closer throws a 98mph fastball that could get even faster as he comes back from TJ surgery. His breaking ball is sub-par, but if any coaching staff can coax secondary pitches from power arms, its the wizard's guild in Minnesota. He's a couple years away from being noteworthy, but Minnesota works in mysterious ways, which means he could get a look in 2009 as a setup man.
*Jugo por PR en el Clasico Mundial 2009. Lanzo 1 entrada en 0 y poncho a 1 bateador.

Ruben Sierra Jr. 18 years old
OF/ TEX
Ruben Sierra Jr. is a 2009 OF/P with a 6′2”, 174 lb. frame from Isla Verde, PR who attends. Sierra is a super athletic baseball player with a lean athletic body. He is very good in the outfield and uses his blazing 6.38 speed to cover a lot of ground. He has a big arm in the outfield and easily reaches 93 mph from the outfield. At the plate he has good bat speed and has pop to all fields. He has easy power when centered and projects well with the bat. His game approach at the plate needs a few adjustments but he shows potential with all five tools. Definite draft follow for 2009. Good bloodlines.

Charlie Fermaint 24 years old
OF, MIL
Fermaint is a very interesting OF who does a lot of things at the MLB level. He has at least a MLB average arm, maybe better, with nice fluid arm action. He could throw even better with more body put into the throw. He can hit, pretty low effort swing that hits line drives that get to the outfield in a hurry. Shows excellent bat speed and hitting ability. He should end up hitting the long ball at the next level. He has some room to get stronger yet. Fermaint had a bad hamstring in Ft Myers, so he did not run the 60. Watching him on the bases it looks like he can run a little when healthy.